The Seven Princesses at The MAK

You are here: Home / The Seven Princesses at The MAK

at The MAK; The Museum of Applied Arts, Vienna

This museum is where you can see Margaret Macdonald Mackintosh’s largest gesso panel, The Seven Princesses, which is considered to be her masterpiece. 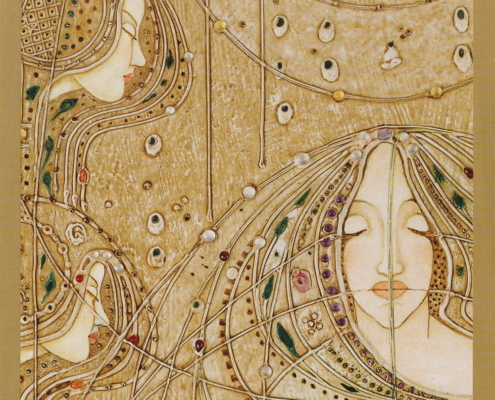 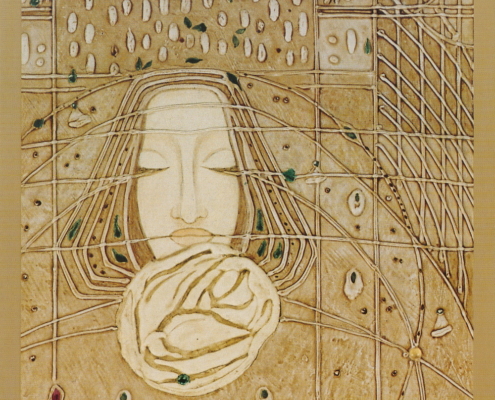 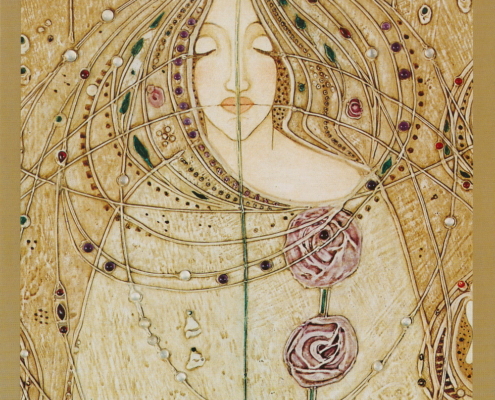 It was originally commissioned by Fritz Waerndorfer (1868-1939) for the Music Room, designed by Mackintosh and Macdonald, in his home in Vienna.

It was installed in the frieze of this room and Mackintosh was also commissioned to create a gesso panel The Arrival of Prince Marcellus. There is doubt that he ever even started this project, although a sketch of the whole design and further sketches of various details have been discovered.

The Seven Princesses, and the as-yet-unfound The Arrival of Prince Marcellus illustrate a play by Maurice Maeterlinck (1862-1949) the Nobel Prize winning Symbolist poet, philosopher and playwright.

It is extremely fortunate that the Seven Princesses survives at all, as with the outbreak of WW1 it could easily have been vandalized as work by the enemy.
However, a curator with great foresight, managed one night not long after the outbreak of war, to remove the panel ( in fact three separate panels ) and took it down to the basement of the museum.

There he had had prepared three crates for them, which when sealed-up he had placed against a wall. Then he had a brick wall built in front of them, which was then painted to match the rest of the walls. They remained hidden like this until in 1990 they were discovered when workmen were installing some pipes and new wiring.

Naturally there was great excitement at this amazing discovery, and as Dai and Jenny Vaughan were then working on the gesso panels for the House for an Art Lover, they naturally wanted to see the panels, especially as they had not suffered from the pollution that all Macdonalds other panels had suffered from.

Dai and Jenny therefore, made contact with the MAK’s chief conservator Manfred Trummer and eventually flew to Vienna to see the work for themselves.

That visit completely changed everything that they were doing, and in fact led to them discarding all nine panels that they had already completed for the Dining Room and re-starting the series of twenty four panels from the beginning