You are here: Home / The Mackintosh House

The Mackintosh House is internally an accurate reconstruction of the house where Charles Rennie Mackintosh and Margaret Macdonald lived from 1906 to 1914. It was the only house they ever owned.

Externally, it is incorporated with Glasgow University Library and the Hunterian Art Gallery, so from the outside it does look somewhat strange. However, internally it has been meticulously reassembled from their original house 78 Florentine Terrace, now named Southpark Avenue.

Sadly, their original home was demolished, as there was subsidence due to mine workings below. This should never have happened and certainly would never happen now.

Despite this the interiors are exactly as Mackintosh and Macdonald created them. Prior to demolition architects made exact drawings and took photographs of the layout of the rooms so that the building could be rebuilt with the same sequence of rooms and incorporating all the contents and internal fixtures. The new building, which is only a couple of minutes walk away from the original, is even facing in the same direction so that the light in the rooms is the same as it would have been.

When you are in the building the whole atmosphere feels authentic and the White Drawing Room is sensational and always takes visitors breath away.

The gesso panel, The White Rose and the Red Rose, is positioned above the fireplace in a room off the main drawing room which it’s believed they used as a studio.

This gesso panel was obviously very close to their hearts for them to have it in their home in such a prominent position.

In 2012 Dai and Jenny Vaughan were commissioned to achieve a gesso panel as close as possible to the original, and so they were very fortunate to be given permission to study the original close-to by Pamela Robertson, who was then the Glasgow University Professor of Mackintosh Studies and a Senior Curator at the Hunterian Art Gallery. 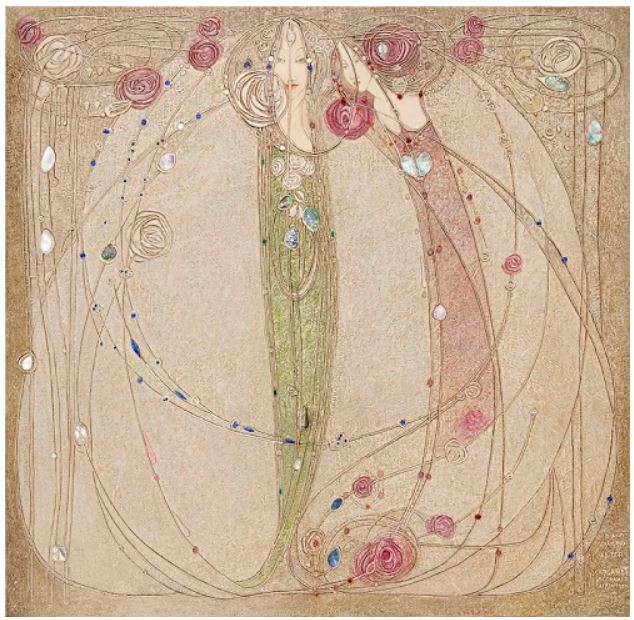 Homage to The Red Rose & The White Rose